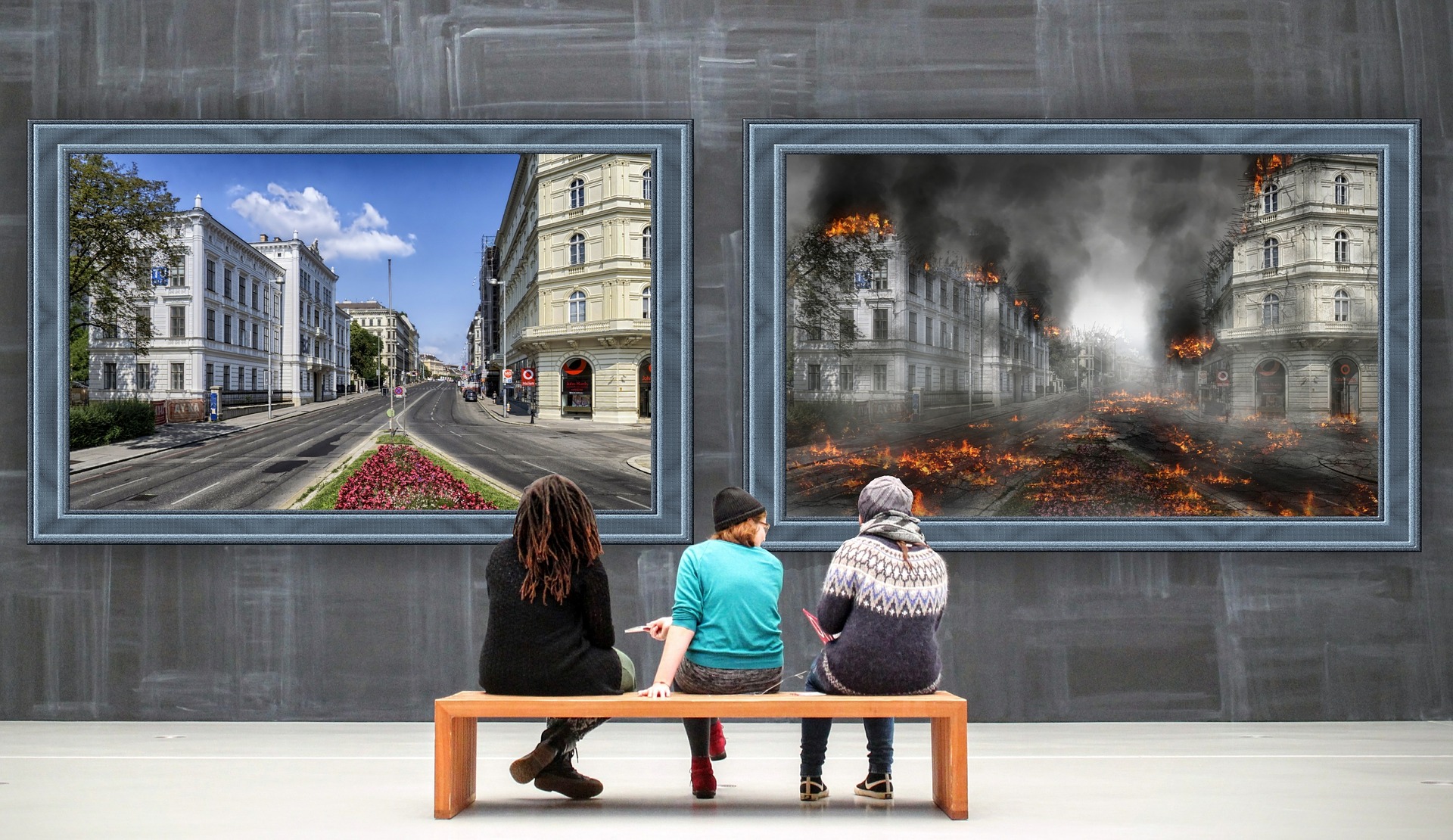 What word or words would you use to describe the powerful contrast in the image above?

Have you ever used the word ‘but’ to draw a powerful contrast?

Review Joel 3:18-19 in the following translations:

NET  Joel 3:18 On that day the mountains will drip with sweet wine, and the hills will flow with milk. All the dry stream beds of Judah will flow with water. A spring will flow out from the temple of the LORD, watering the Valley of Acacia Trees. 19 Egypt will be desolate and Edom will be a desolate wilderness, because of the violence they did to the people of Judah, in whose land they shed innocent blood.

NIV  Joel 3:18 “In that day the mountains will drip new wine, and the hills will flow with milk; all the ravines of Judah will run with water. A fountain will flow out of the LORD’s house and will water the valley of acacias. 19 But Egypt will be desolate, Edom a desert waste, because of violence done to the people of Judah, in whose land they shed innocent blood.

Like the street scene on the left at the top of this post Joel 3:18 describes a positive image.

Like the street scene on the right at the top of this post Joel 3:19 describes a negative image.

Did you notice that the NIV starts Joel 3:19 with the word ‘but’?

Keep in mind that the NIV is a text that applies a thought for thought approach to translating the original Hebrew. The NET translation uses a word for word process.

Why does the thought for thought translation add the word “but” to their text?

The word “but” is typically used when connecting two different things that are not in agreement.

What are the items that are in a powerful contrast between Joel 3:18 and 19?

Joel 3:18 has the following described:

Joel 3:19 has the following described:

What reason is given in Joel 3:19 for the desolation of Egypt and Edom?

Both translations say the same thing:

Is it necessary to use the word “but” to see the differences between these two verses?

In my opinion, no. Reading the word “but” does however cause a pause in one’s thinking and stresses the focus towards what follows it.

Why is the Lord making a powerful contrast between what He is promising to do for Judah and those who have harmed them?

Remember this entire book is a message from the Lord to His followers, specifically Judeans or Israelites who are faithful to Him but also to any who embrace the same allegiance to Him as Lord and Savior. (See Joel 1:1-3)

The Lord’s message to the His followers implied that they had been negligent in their faithfulness to Him, so he sent locusts, drought, and fire to wake them up to this fact. (See Joel 1:4-2:11)

The Lord also shared that if His followers would humble themselves and return wholeheartedly back into relationship with Him, he would restore all that had been damaged and bless them more abundantly than ever experienced previously. (See Joel 2:12-32)

Then in Joel 3:1-15 the Lord declares what will happen to all who harmed the Judeans while He was disciplining them for their unfaithfulness to Him. The Lord also commands the Judeans in this section share His plans with those who harmed them.

Our verse of Joel 3:19 today follows several verses assuring the Judeans again that the Lord is their refuge and source of provision. (See Joel 3:16-18)

The Lord is stressing that He is in charge and has been even before He sent the locusts to wake up the Judeans in this message through Joel.

The Lord makes a strong contrast between how He will protect and provide for those who are faithful to Him and those who have harmed His faithful servants.

Even so, we must not forget the instructions that were given to the Israelites in Deuteronomy:

If someone has harmed a follower of the Lord but has later repented just as it is implied the Judeans repented in Joel and returned to a wholehearted faithful relationship with the Lord, then rest of the Lord’s followers are to accept them graciously back into the assembly of the Lord.

These words in the passages highlighted today reveal to me that the Lord desires to mend brokenness not only between Himself and His creation but between people groups as well.

Yet, the Lord is also a Holy God who will issue appropriate consequences for those who choose to turn away from His call toward faithfulness.

Spend some time this week reflecting on Psalm 23 for further encouragement.

What other insights struck you as you read this study today?

Leave a comment on the blog for further group discussion or email me for a private comment.