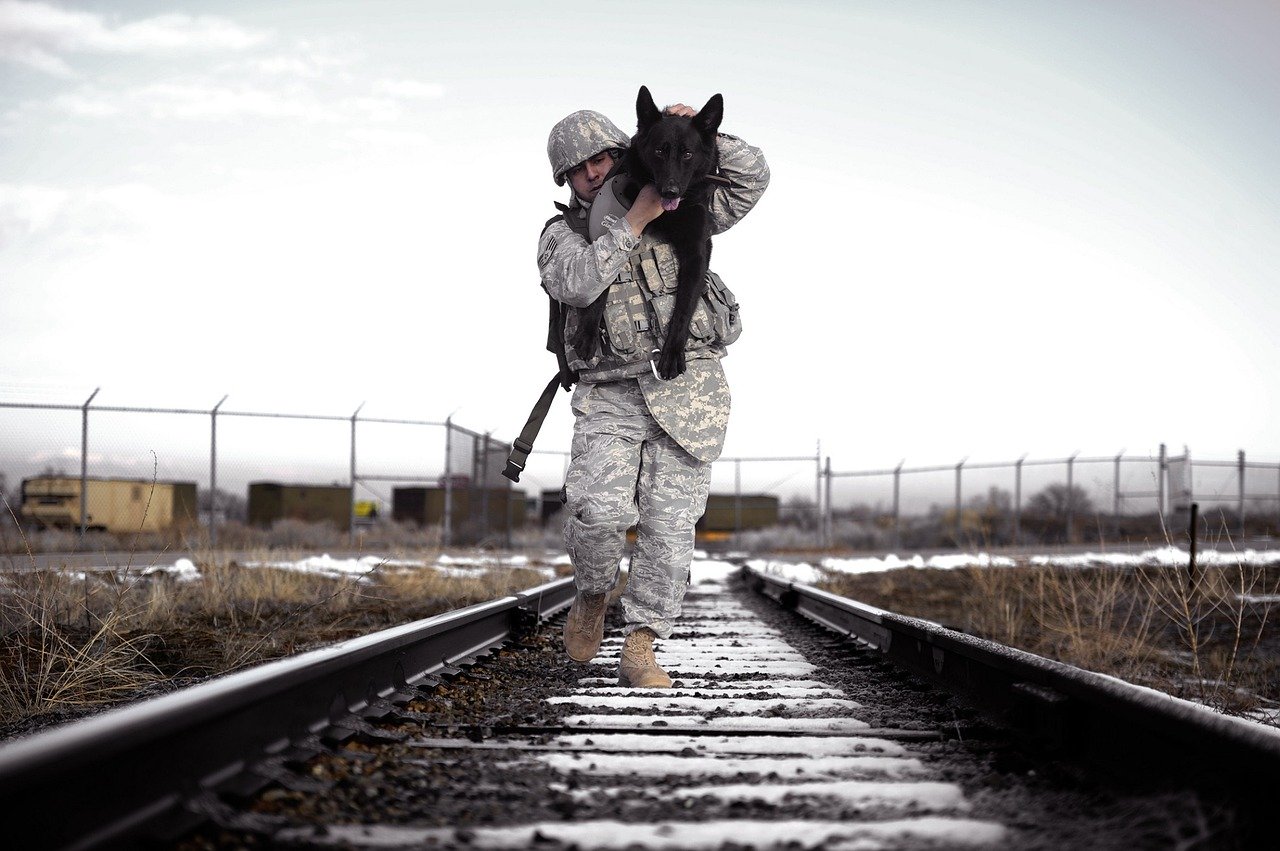 What is the first image in your mind when you read the word endurance?

I immediately think of endurance athletes such as Iron Man competitors who train to complete the longest  triathlon of swimming, biking, and running.  Competing in this requires serious preparations over months or years to perform well.

The ability to withstand hardship or adversity over a prolonged stressful effort is an apt definition of endurance when applied to an Iron Man competition.

So why did I choose an image of a soldier carrying a dog for this post instead of an image of endurance athletes?

Like endurance athletes, soldiers undergo rigorous endurance training to do what is required of them in their work. They are expected to not only have endurance but operate from a sense of duty and obedience under their commanding officer.

Like endurance athletes and soldiers, most dogs are not only willing but eager to go on long walks or runs. Dogs have great endurance and willing spirits in most cases. When trained well, dogs are also incredibly obedient creatures.

Now I do not know the reason the soldier is carrying the dog in the picture above. It may be a playful situation, or it may be the dog is injured in some way and needed some help from the soldier’s endurance.

Some of the reasons I chose this picture are because our verse today talks about the Lord’s army, their obedience, and asks an unsettling question about endurance.

NIV  Joel 2:11 The LORD thunders at the head of his army; his forces are beyond number, and mighty are those who obey his command. The day of the LORD is great; it is dreadful. Who can endure it?

What do we learn in this verse?

We are explicitly told that the invaders that have been described in Joel 2:1-10 by comparing them to the locusts in Joel 1 are the Lord’s army. The Lord is their leader.

There had been hints about this back in Joel 1:15 and 2:1 but now in verse 11 it is made crystal clear who is leading the attack.

What does the Lord thunders mean?

This image is of the Lord speaking. Thunder generally connotes a loud, intense booming rumble during a storm. Thus, the imagery here is of a powerful commander instructing His troops.

What is communicated by “his forces are beyond number”?

Another translation says his army is innumerable. In other words, there are so many soldiers in the Lord’s army that they are not countable. His army is vast. Another image that is meant to connote power.

What is communicated by “mighty are those who obey his command”?

The Lord’s army is mighty because they are obedient to His commands. In other words, they do what is asked of Him when He commands them to act. Thus, He strengthens them with His own power to make them mighty.

How is the day of the Lord described?

We are told in this verse that the day of the Lord is great and dreadful. Some translations use the word awesome or terrifying instead of dreadful.

Now for the most unsettling part.

The community of Judah is supposed to be in covenant with the very Lord whose army has been commanded to attack and destroy them just as the locusts in chapter one had attacked and destroyed their vegetation.

How can they possibly have the endurance to survive an attack of this nature?

This is an alarming situation, worse than dealing with the locust infestation that caused a famine. This is their covenant Lord coming against them with all His power and might.

Are you unsettled by this image?

It looks nothing at all like the soldier carrying the dog on his soldiers I used for this post.

Instead it is a horrifying proposition that should cause the community of Judah and us to pause and reflect on how we are living out our days.

Are we intentionally training with endurance towards being a part of the Lord’s obedient army that knows His voice and follows His lead?

What does that look like day to day if we are?

Why is endurance necessary?

Are we willing to assist another on their spiritual journey like the soldier carrying the dog?

Or have we been neglecting and avoiding the Lord’s call towards faithful endurance and obedience to His commands?

What will it take to wake us up to hear the Lord’s call to us in every area of our lives?

Consider these words from another prophet of the Lord:

ESV  Ezekiel 33:10 “And you, son of man, say to the house of Israel, Thus have you said: ‘Surely our transgressions and our sins are upon us, and we rot away because of them. How then can we live?’ 11 Say to them, As I live, declares the Lord GOD, I have no pleasure in the death of the wicked, but that the wicked turn from his way and live; turn back, turn back from your evil ways, for why will you die, O house of Israel?

The implications up to this point in the book of Joel are that the community of Judah had not been alert to the Lord’s call nor obedient to His commands. Thus, He is going to extreme measures to get their attention.

The implication in the verses from Ezekiel 33 above are that the Lord desires us to live righteously in unison with Him.

Remember the Lord is who sent messages through the prophets Joel and Ezekiel to the community of Judah or Israel and now us today.

When has the Lord taken extreme measures to get your attention?

How has your faith grown because He took extreme measures to reach you?

What else do you see in Joel 2:11 that motivates or inspires you?